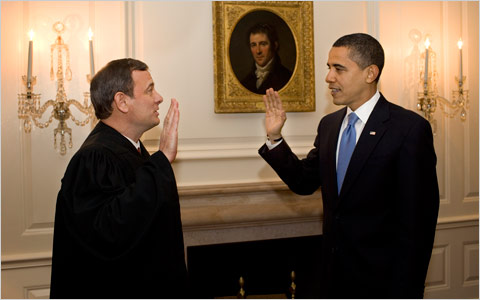 Millions of people on the National Mall in Washington, D.C., across the country, and around the world cheered after the swearing-in yesterday of Barack Obama as the 44th President of the United States. It probably did not matter to most of them that the Chief Justice of the U.S. Supreme Court flubbed the 35-word oath.

Chief Justice Roberts misplaced the word, “faithfully” and then at another point, omitted the word “execute.” That explains the hesitation and quick look of confusion on Obama’s face as he took the oath yesterday with his hand on the 148-year-old Abraham Lincoln Bible. Today, no Bible, no big crowds or chilly temperatures. The Chief Justice re-administered the oath to Obama in the White House map room in front of a small group of aides and reporters at 4:35 p.m. Pacific Time.

Still, per the Constitution, Obama became the president at noon on Inauguration Day without the oath.  Also, President Obama is not the first Commander-In-Chief to take the oath twice just to be sure. The others were Calvin Coolidge and Chester A. Arthur.