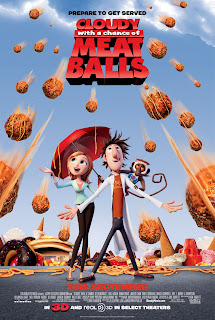 The animated family flick, “Cloudy with a Chance of Meatballs” led the pack of new films and other contenders at the Box Office over the weekend. Based on the classic children’s book of the same title, “Cloudy with a Chance of Meatballs” is the whimsical tale of a town where food falls from the sky like rain. Character voices include Bill Hader, Anna Faris, and James Caan. The 3-D animation pulled in the biggest share of the movie audience, raking in around $30 million to become the number one film in the country.

In second place, “The Informant!,” the new Matt Damon comedy about a corporate whistleblower managed only a modest debut of an estimated $10.5 million. Last week’s number one domestic film, Tyler Perry’s comedy-drama, “I Can Do Bad All By Myself,” came in third with about $10 million. Jobless rates jump! Where is that recovery?
Barbra Streisand to auction off personal possessions